The first time I came to Death Valley was 26 years ago, I was 9. My dad had taken me and my older sister on a road trip and we ended up driving through the desert on our way to (or leaving?) Las Vegas. The desert was unrelenting that day, his yellow Toyota truck cutting through the heavy walls of heat, air like hot flames through the rolled down windows.  My fair skin turned red and I cried hot tears until he poured a few gallons of drinking water over my head. The desert I met that day was one of perilous survival, the valley of death. I can’t corroborate how serious my heat stroke was since my dad passed away 10 years ago and my sister and I are now estranged.

This time I come to the desert with my boyfriend M in his silver truck “cocoon” (named for her camper shell.)  After two days of driving south on Route 5, east through Bakersfield and over the Panamint Mountains, we descend 5,000 feet to the valley floor at sea level.  Our talking slows, breaks are burning, ears popping, eyes open. The landscape on either side of us has turned into strange tufts of shrubbery sprouting out of expansive dry orange and brown earth. We stop at the first camp site we find called Emigrant as the sun goes behind the mountains. Orion shines on the horizon lit up against the darkest black palette of sky. Our only company is a few other campers and a scavenger fox who drinks water spilled from the public faucet.  (The fox will be the only animal I see besides a pack of big black birds that peck around our camp for food scraps and the distant howls of what sounds like coyotes)  There is a stark silence here: no wind, no bird calls. The only sounds tonight are the soft whispers of other campers, the occasional car on the highway, and our own clanking of pots as we make some hot tea and dinner.

The winter desert seems docile compared to the threat of summer weather.  I ask the cashier at the general store how bad it gets and she just shakes her head. She says people who stay here long term “don’t have all their oars in the water.”  Our second day we settle in the Stovepipe Wells camp ground, passing by the RV’s to find a site with a fire pit (a deal breaker for M if we can’t get one). M brings more than enough wood, being a lover of all things flammable. He plays the role of manly provider, over excitedly cooking meat on the grill and spending hours prodding the fire.  I play a little ukulele sitting by the picnic table by the light of the fire, but feel out of practice.  Being in the desert makes me more the quiet internal observer. Even though it is early we squeeze into the back of cocoon with our hats and long johns, huddled together for warmth, listening to the breathing and the snoring of the tents around us.

There is not a single tree or cover for shade here and we put on our sunscreen and hats in the first full light of the day blaring over the mountain at 8 am. We fill our water bottles and backpacks to hike in the surrounding canyons. On the road to Titus Canyon north of camp, there is a sign pointing to over 100 year old grooves where the pioneer wagons traveled across the desert in their trek West…I think of what it would be like: looking at the ominous mountains, no map, no certainty. What kind of faith in god or stubborn perseverance must they have had  to keep moving forward. I am quiet in some thoughts of the uncertainty in my life back home as we hike deep into the canyon on rough bouldery trails, our crunching steps bounce and echo between the cavernous massive sky-scraper walls. The shrubs that are scattered along side the trail are the strangest opaque light green leaves with brown and pink flowers.

Alvar loved the desert.  My grandfather had been a geologist and passed along the fascination with rocks down to him and my older brother. He knew which dirty and ordinary rocks could be cracked open to reveal crystal geodes.  The spirit of the desert suited him: a mix of adventure, survival, lawlessness. He was desperate to break away from the cold limitations of his parents and their generation. My grandfather for the most part disowned him when he was in his 20’s after he refused to earn a proper degree at Yale and instead moved out to California to join the counter-culture. But when there was no further West he could go, drinking became his act of rebellion, escape and eventually self destruction.

Mosaic Canyon is above our camp. We can see the trials of dust rising up like smoke from the lines of cars driving up to the trail head. Our third day we follow suit and park among crowds of tourists with baby carriages and cameras. There is a woman in lipstick and perfume, a man in a button down shirt with a sweater wrapped around his neck. I find myself annoyed at the impracticality of people dressed like they are going to Disneyland in the desert.  We run our hands along the cool polished stone walls that curve and spiral upward above the narrow path like the inside of a sea shell; ground down over a million years of floods.  I take pictures of M with his camera and he takes pictures of my braided pigtails. We agree people are more interesting than landscapes. I ruminate over some comments M makes back at the trailhead. I see the little 9-year-old-me sitting on a rock sulking. Here you have to keep your wits about you and there is not a lot of time for self-indulgence so I choose to ignore her.

In some ways M is nothing like Alvar. M is more settled in his own skin and has awareness and integrity. He is not afraid to look at who he is. But the similarities do not escape me: both adventurous, tall, film photographers with a passion for light and for life. The combination of lack of sleep and lack of usual distractions makes me hyper aware of the way my mind jumps from one thing to another: fears, worries, projections, the future, the past. M tells me on the drive down he wants to learn how my brain works on this trip. I wonder if he is making any more progress than I am.

Between the two of us we have 9 cameras. We find our days being arranged around the late afternoon light of “magic hour.” We park at the infamous sand dunes just in time for the sun to peek out from it’s cloud cover and we shoot our long shadows in the sand. We eat salami sandwiches in the truck and watch tourists pose for pictures.

Our camp site is between a very chatty Canadian and his motorcycling friends and a photographer who talks with M about cameras and the best places to shoot in the desert. M tells him how we are reviving one of Alvar’s old large format cameras and it is comforting to hear his name mentioned out loud since he’s been on my mind the whole trip. At the suggestion of our neighbor, the next day we head south to the Badwater basin, the lowest point the the U.S. (-282 below sea level.) While I had seen the pictures I am stunned by the beauty of this other worldly place, glowing white ground extending as far as my eyes could see. My skin is hot from the brightness of the flats and my head hurts. We stop on the way back north at Zabriski Point. I take pictures of M with his Mamiya and tripod in the setting sun and a tourist couple who asks me to.

Our last day is New Years eve. By now everything is covered is a fine white dust; the truck, our clothes and shoes.  I feel like an astronaut, each step my boot leaves a footprint in the white ground. It is a cold night, the camp ground has thinned out and the few people left are celebrating and drinking around their fires. We walk up to the saloon and listen to the count down from outside the door. A single green burst of fireworks explodes in the sky. We wearily try to sleep through the Canadian’s never ending stories and his drunken friends’ antics (they run out of wood and begin burning logs made out of toilet paper stuffed with sticks of butter.) I am too tired to think it is as funny as it is or to tell them to quiet down. Instead I put in some ear plugs and try to get some sleep.

January 1, 2012. We begin the steep climb out of the valley. I squint my eyes and I can see Alvar’s truck flying down the highway past us, wind in his hair, oars up, devil’s flames nipping at his back wheels.  M rests his hand on my leg as he drives, I leave tired and happy. 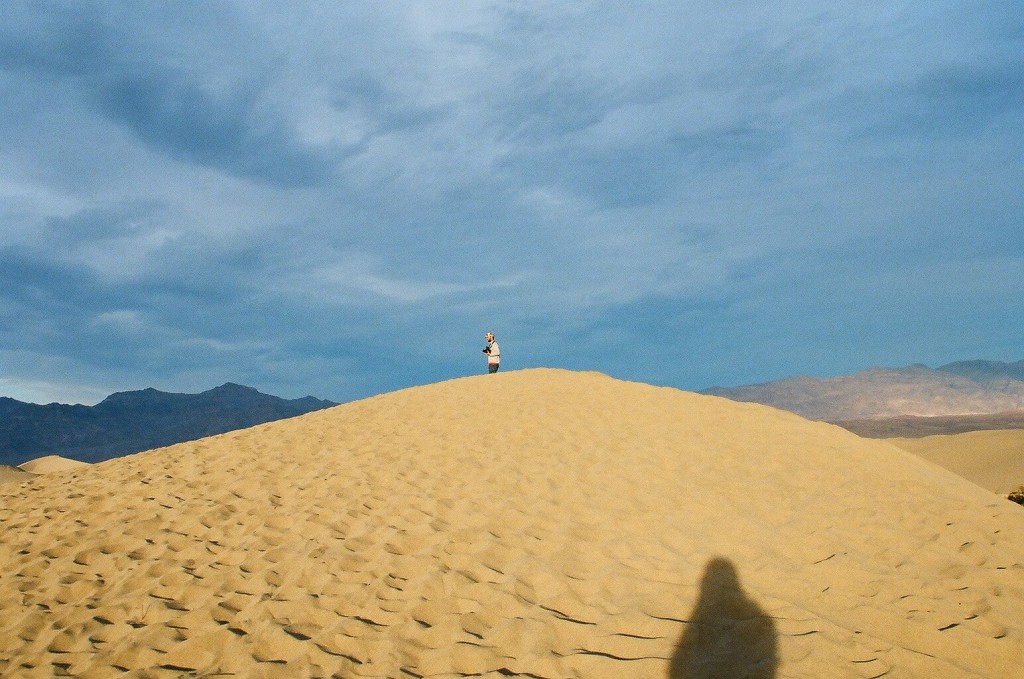 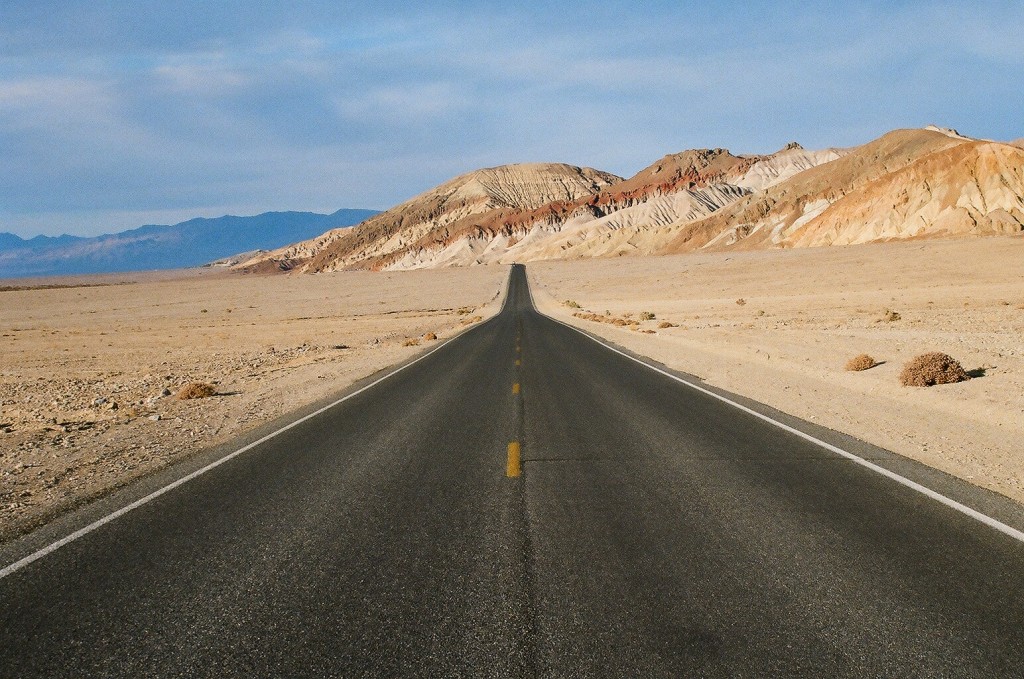 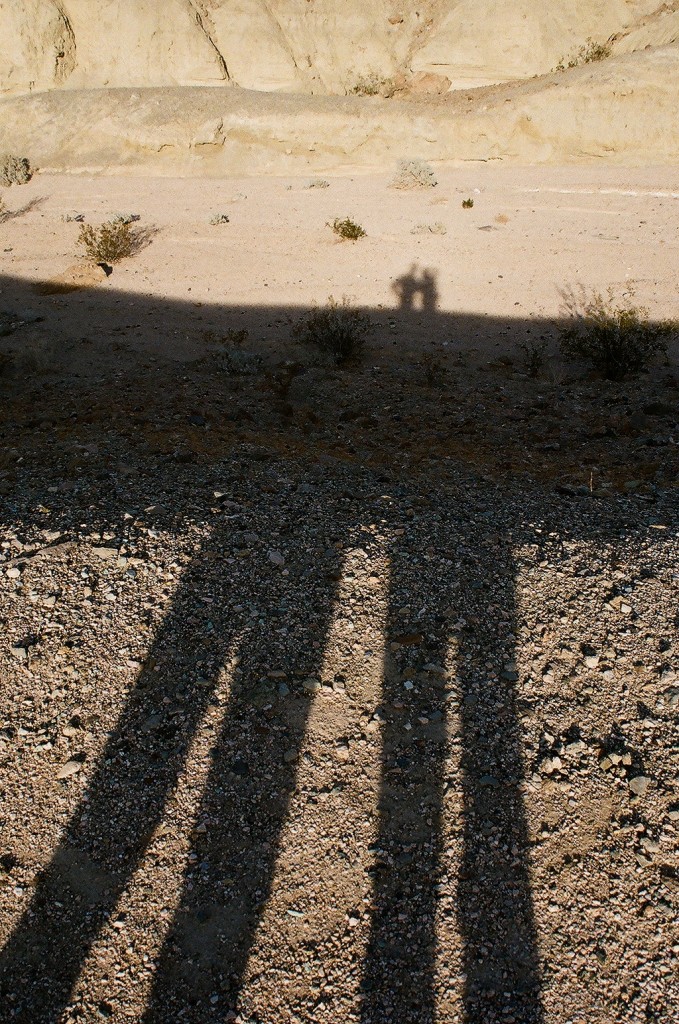