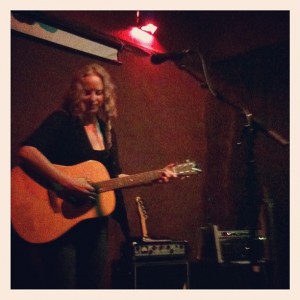 “…Brindl went on. As a last-minute quick sound check, she strummed a couple of chords and moaned into the microphone. No “TESTING 1-2-3,” uh-uh, nope, she moaned–a lingering sort of “oh-ohhh-oh-ohh.” Not a consciously sexy sort of moan, mind you, but simply a fragment of one of her songs (I guess). Wow. She did it twice. Then she sang and played a song–solo, on acoustic guitar. Brindl’s music doesn’t just affect your ears. It ENWRAPS you. That hard bench you’re sitting on starts to feel like a chaise lounge. Saturated by a soothing female voice from which all concussive consonants seem to have been removed, the air becomes vaguely amniotic. Addressed to a man, the words of the song assured him that love was coming his way. (Brindl is not shy about writing songs about intimate relationships, but she does not specialize in heartache; her songs are life-affirming, love-affirming.)

I looked around at a couple of other guys in the dimly-lit room. They were completely entranced, exactly as I was when I first saw Brindl perform. I was starting to understand how the spell is cast, even if I cannot adequately describe its effect or account for its subtle power.

Brindl joked upon finishing the song that it might have put some people to sleep, and she then embarked on a somewhat faster number. I stayed for one song after she summoned a bass player and a second guitarist to accompany her. When I left, I did so surreptitiously, hoping that she wouldn’t see me or construe my departure as an indication of my reaction to her performance, a reaction which was (for the second time) a big thumbs-up. -MF